How I learned about racism. Part I

Although I didn’t know it at the time, I was about to get my first lesson in racism, also known at that time as “Jim Crow.[1]” It was 1953, and I had turned nine years old the previous December. My mother, my baby sister, Roxie, and I had recently returned from Gold Beach, Oregon, where we had spent about nine weeks with my dad. My uncle had found work for my dad at a lumber mill in Gold Beach, so he stayed there, and we rode a Greyhound bus back to Bethany, OK, and moved in with my grandmother.

I started school in fourth grade at Bethany Elementary School, and I was out for the weekend. My mom had got a job at John A. Brown Department Store in Oklahoma City, and she was also home for the weekend. She had planned for us to go Oklahoma City on Saturday and shop for new shoes for both of us. We got dressed, her in a straight skirt that was below her knees, a tucked-in blouse with a wide leather belt around her waist, and high heels, and I was dressed in my best pair of blue jeans, t-shirt and Keds. (I was a tomboy then and still am to this day.)

This would be my first bus ride to Oklahoma City, and one I would not soon forget. We said goodbye to my grandma and my 13-month- old sister, Roxie, and started the short, one-block walk to the Bethany Bus Station and Cafe. Mom bought our bus tickets, and we took a booth in the cafe and ordered a Coke. The bus arrived, and after waiting for a few passengers to get off, we boarded. We looked for two seats together, but there was none. As I looked around, I noticed a long seat that extended across the back of the bus. It was empty except for one colored man who was sitting next to a window. I caught mom’s hand and told her there was plenty of room for us in the back seat. She looked at me and said quietly, “We can’t sit back there.” When I asked her why, she whispered to me to read the sign above the seat. I had paid no attention to the sign until then but painted on the back wall of the bus in big, black, capital letters were the words, “COLORED ONLY IN THE BACK SEAT.”

After the next stop, we found a seat together, and I could hardly wait to ask about the sign. She told me to wait until we got off the bus, and she would explain. Considering it was 67 years ago, I cannot remember exactly what she said, but the essence was that there were some folks who did not like colored people and did not want to sit by them. It was an explanation without meaning to me; one that I would not forget and would not let rest.

Our bus arrived in Oklahoma City, and we got off at the Union Bus Depot. (I was about to learn more about racism.) Inside the bus depot was a semi-circle counter where men were selling bus tickets. There were two big waiting rooms with many rows of fold-down seats. Between the rooms was an open-sided cafe with semi-circle serving counters and stools. On the other side of the cafe was another waiting room where many colored people were sitting. I remembered the bus with the "Colored Only" seat and guessed the same rule applied at the bus station. In the cafe there were people sitting at the counter eating and drinking, but there were no colored people.

It was about a two or three-block walk to Rothchild’s Department Store where mom planned to get our shoes. When we got there, we walked in through two huge, glass, swinging doors, and I saw before my eyes so many beautiful things. There were long counters with glass on the front that showed off gold and silver jewelry, women’s purses, and other things I cannot remember. Beautiful women with their hair done up in buns on the backs or tops of their heads were behind the counters tending to well-dressed customers. I remember thinking it was like a movie I had seen. Mom steered me toward the elevators at the back of the store, and I told her I needed to go to the restroom. Finding the restroom, I immediately noticed separate water fountains, one for Colored and one for White. I can’t remember specifically, but there must have been four restrooms; one for Colored women and one for White women; one for Colored men and one for White men. The sign on the bus had interested me, but what I saw at Rothchild’s intrigued me, even more.

End of Part I 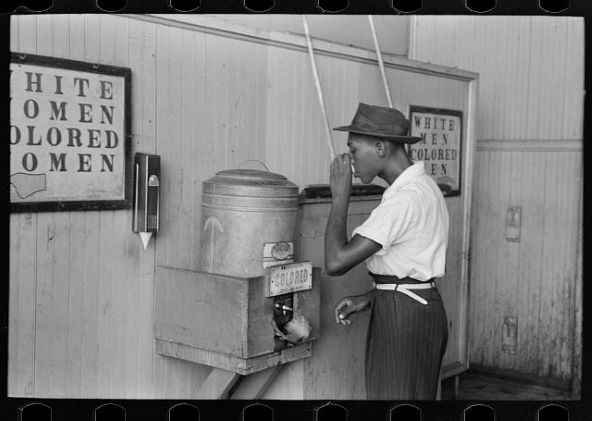 This picture was taken in Oklahoma City, OK, in July 1939. Photographer: Russell Lee. Picture is entitled, " "Man drinking at a water cooler in the street car terminal." [Sign: "Reserved for Colored."

Why should we care about world issues?
Education: Why do we need it?
What has happened to our country?